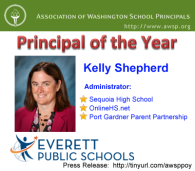 It is often said that being recognized by one’s peers is the ultimate honor. Sequoia High School Principal Kelly Shepherd says she is surprised and humbled by “those I admire so much and from whom I have learned so much suggesting me for this honor.”

Sequoia is also the site for Port Gardner Parent Partnership. At Port Gardner, families of kindergarten through high school students choose to mix the best of public school programs with their own home school experiences.

In their letters of nomination, teachers, fellow Everett Public Schools principals and administrators and community leaders spoke of Shepherd’s educational leadership, community, commitment and community connections, her focus on what’s best for students and her example as a continuous learner and collaborator.

Jo Anne Buiteweg, once a staff member at Sequoia and now Director of the Learning Management System for the district, wrote in her nomination letter wrote of Shepherd, “She contributes the most valuable resource she has, her time and creative mind.”

Online High School teacher Kathy Seltzer noted, “Ms. Shepherd employs the synergy of a team to get results. She has collaborative working relationships with teachers and other staff to improve the educational program and student achievement.”